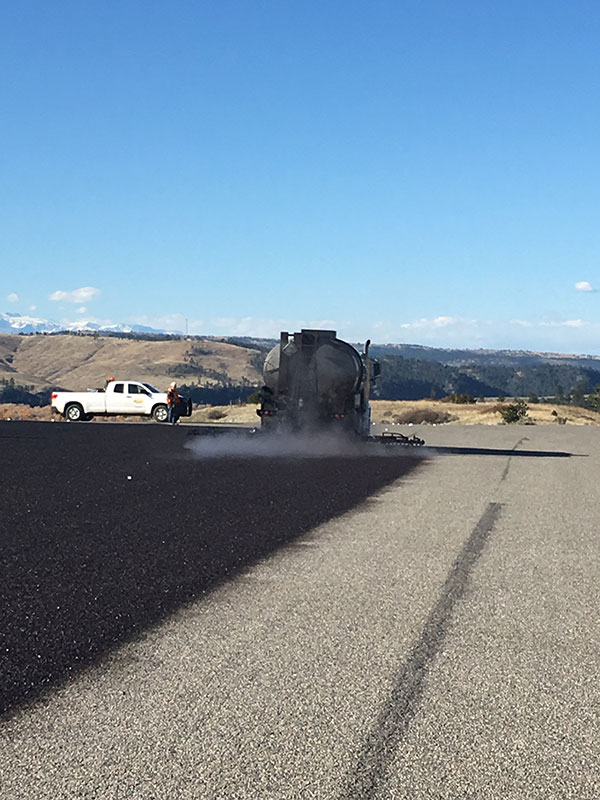 Fog Sealing is a very thin layer of oil is “misted” over the existing asphalt surface.

Generally speaking, fog seals utilize slow setting oils. These are oils designed for maximum stability. They dry more slowly than most other oils and have lower viscosities, meaning that they are thin and runny. In this area, the oils used most commonly for fog sealing are CSS-1 and CSS-1H. These are generally cut 50/50 with water to lower their viscosity and promote penetration.

A fog seal is applied by a specialized truck known as a “distributor”. The product distribution is applied with computerized rate controls making a fog seal a very economical solution in the right situation.

Fog seals can be utilized in several different applications.

The most common application is airport projects. Fog seals are used extensively to maintain the quality of runways by rejuvenating porous friction course pavement and sealing the surface of smooth asphalt while preserving skid resistance. Fog seals are also utilized at times as a sealant over chip seals or new asphalt. In both applications they serve to seal the new surface as a preventative measure. These can be in either parking lots or on roadways.

It is important to remember that while a Fog Seal is less costly, it does not seal as well or last as long as a treatment with Steelcoat™. In the right applications however, a fog seal is an effective and very cost efficient means of preserving your asphalt investment.